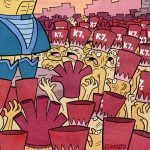 I got to design and illustrate an album cover for K7s, a new band from Spain! This is for their debut album, now out via Rum Bar Records. The band wanted a cartoon. They originally asked for a pizza/beer scenario. I suggested that we try for something a bit more unusual and submitted two sketches. […]